February was a pretty good month, with warmer than average temperatures. In fact, the temperatures this month were record breaking and quite beautiful.  Morning temperatures were in the 60s and afternoons in the lower 80s. The fish were turned on by this weather.

We saw a lot of fish that normally don’t show up until the end of March. On several trips, we noticed more and more bait, Silverkings a.k.a. Tarpon, Trout, Sheaphead, and Snook. Pods of Drum and Redfish Started coming in toward the end of February.

Scott’s party had a great time. Seatrout were plentiful in the beginning of the month.  They were also lucky to pick up a nice 22″ Sheaphead. 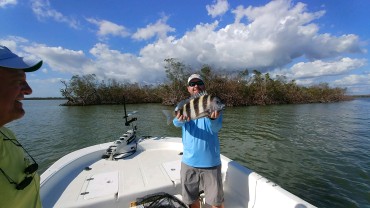 Toward the middle of the month, Kim and I had a chance to scout the waters.  Due to the water temperatures rising, we were lucky enough to get in on the Trout and these big guys. Of course, she brought in the biggest one, and lost an even bigger one.

Repeat customers and now friends, Bonnie and Tim, a 911 first responder and survivor, had plenty of opportunities.  They nailed this drum on the second to last cast of the day.

New customer and friend, Tom, hailing from my old city of Pompano Beach, wrapped up the month with a quadruple of Drum.  Three were released and one returned for dinner.  By far, his was the biggest of the month, weighing in around 30 pounds.

March is expected to be even better, with plenty of bait in the water, Tarpon, Snook, and Redfish showing up early. We are expecting beautiful weather.  Hope y’all can get in on some of this Spring action.