The first week of April was completely blown out, with winds gusting to 25 knots.  We did make it out for one charter, where the Trout were plentiful. The other two charters were rescheduled for later in the month.

The second week brought better conditions, tight lines, and big fish.  Pictured below, Liam and Aly enjoying a mid-week trip with their grandfather.  Liam was ready for anything!  He battled this 5 foot Black-Tip Shark like a champ!  The shark was released, but the memories will last a lifetime.  They also caught numerous Trout, Jack Crevalle, and mixed bag fish. 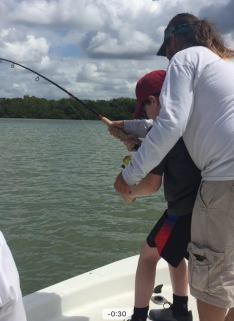 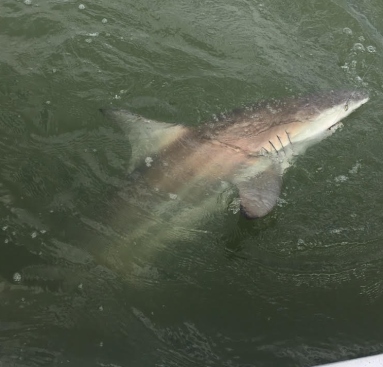 Later in the week, I had the pleasure of guiding experienced fishermen, the Neuman father-daughter duo.  Still waiting on some of the pictures and video to be edited, but I can tell you the story.

The day started out with stories of grandeur, finding out Miss Neuman had just returned from a fishing trip in Mexico, where she caught and released her first Striped Marlin and was looking forward to her first Tarpon release. No pressure for this captain!

As we headed out, I explained my techniques for fishing the Ten Thousand Islands.  I don’t target specific species, but rather target all species with a focus toward the desired species.  That day, it was Tarpon.

Fishing began on a low tide, with a strong incoming tide, which is the preferred tide in the 10K. We started on the outside points, catching bait and Trout in the process, while watching the Everglades wildlife wake up.

After making bait, we went to our first spot. Positioning the vessel on a point, with good moving water, the bite hadn’t turned on yet.  We gave it 30-40 minutes and moved on.  At the next point, with similar conditions, we anchored the vessel and put two long rods out into the bay, while fishing for trout on the transom, facing the island points.  The Trout coming off of the point were in good size and numbers, but nothing was hitting the big baits in the bay.  We fished there for an hour, loading the cooler with Trout.

Moving on to the third point of the day and positioning the vessel and bait in the same fashion, we were in for a surprise.  While thinking Snook and Trout close to the Mangroves on light tackle and large baits out into the bay for Shark and Tarpon, a 175 pound Tarpon decided to eat Miss Neuman’s trout bait (15 pound spinning gear), close to the Mangroves. Boy were we shocked when this monster Tarpon came out of the water 20 feet behind the boat.

The rule is, if you hook a Tarpon on light tackle and have it on for the first three jumps, there is a chance of catching it.  Miss Neuman battled this beast for an estimated one hour and 30 minutes, with several jumps and two leader touches.   This silver king finally swam away, unharmed, leaving this father and daughter duo with memories and fish tales for many seasons to come.

I hear there is some great video footage.  Once it’s edited, we will add it to the blog.  In the meantime, here are a couple of the trout caught that day. 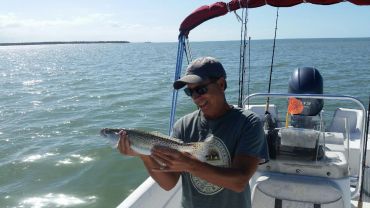